The heath fritillary (Melitaea athalia) is a butterfly of the family Nymphalidae. It is found throughout the Palaearctic from western Europe to Japan, in heathland, grassland, and in coppiced woodland. Its association with coppiced woodland earned it the name "woodman's follower" in parts of the UK.[1] It is considered a threatened species in the UK and Germany, but not Europe-wide or globally.

Heath fritillaries have a wingspan of 39–47 mm.[2] The upperside is predominantly dark brown and orange brown, with the orange-brown spots delineated by dark brown (along and across the wing veins); there is a white fringe to the wings through which the dark brown extends. The upperside of the body is a similar dark brown to the colour on the wing, and the base of both wings is dark brown. The underside shows bands of red and (off-)white, again with each vein dark brown and each colour delineated by dark brown. The pattern of white spots at the base of the hindwing (visible at rest) is diagnostic for identification.

These wing patterns are very similar to the appearance of Melitaea cinxia. However, the dark brown bands on underside of the wings are more distinct in the health fritillary than in M. cinxia.

The heath fritillary ranges throughout the Palaearctic region from western Europe to Japan.[2] In Europe, it is absent from Iceland, Ireland, Scotland, Wales, southern Portugal, southern Spain, the Mediterranean islands and southern Greece.[3]

In the UK, it is restricted to Cornwall and Devon grasslands (abandoned hay meadows); Exmoor (heathland); and Kent and Essex (coppiced woodland on acid soils).[4] The populations in Essex are the result of reintroductions,[2] and further reintroductions are ongoing in various other parts of the UK.[5] In the late 1990s, the species was estimated to occupy just 0.2% within the 10-km grid squares over the whole of its UK range.[6]

Heath fritillary is not listed on the IUCN Red List,[7] suggesting that globally it is not considered threatened. In the UK, however, the species was "considered to be the most endangered British butterfly" after a nationwide survey in 1980 found only 31 surviving colonies. Consequently, it was given protection under the Wildlife and Countryside Act 1981.[2] Despite subsequent widespread efforts to conserve and manage the species' habitats, it has continued to decline: distribution has declined 25% since the 1970s, and abundance-wise it declined by 46% in the 10 years 1995–2004.[8] Woodland sites in Kent and Essex are actively managed (coppiced) for the conservation of this species. It has been a "high priority" species in the UK Biodiversity Action Plan since 1995 and has its own Species Action Plan.[9]

Heath fritillary is also on the "Red List" in Germany.[10]

However, the species is considered of "least concern" on a European scale.[11]

Within Europe, the heath fritillary occupies a diversity of grassy, flowery habitats—dry or damp, upland or lowland, with or without shrubs or trees, including woodland clearings and heathland.[3][12]

In France, this species also occurs on unimproved hay meadows and pastures.[2]

The Wilder Blean project, headed up by the Wildwood Trust and Kent Wildlife Trust, is introducing European bison to the UK for the first time in 6000 years. Their actions create open, light-flooded patches that encourage the growth of cow wheat.[13] The herd of 3 females and 1 male will be set free in 2022 within a 2,500-acre conservation area in Blean Woods near Canterbury.[14][15]

Heath fritillaries typically fly close to the ground, with characteristic "flits" and glides. Colonies tend to be compact, centred on favoured breeding areas. Heath fritillaries are highly sedentary for the most part, adults rarely moving more than 100 m; however, some have been recorded dispersing up to 2 km. For a species of often short-lived habitats, it has remarkably limited colonizing ability; suitable habitats over 600 m from an existing colony are colonized slowly.[1]

A pair of health fritillaries

Eggs are oval spheroids with flattened bases, about 0.5 mm high. They are ribbed (longitudinally, i.e. from top to bottom) and striated (transversely, i.e. around the egg). Pale cream when laid, eggs darken to pale yellow within two days, and then dark grey a few days before hatching. Eggs mature in two to three weeks.[2] 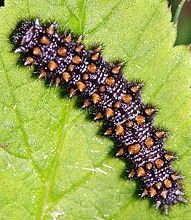 Caterpillars re-emerge in early spring. When it is warm, they feed a little, but most of the time is spent basking in the sun. There are six instars in total. The full-grown sixth instar caterpillar is 22–25 mm long, and predominantly black; it has pale (yellow-orange) spines and (greyish-white) spots.[2][4] 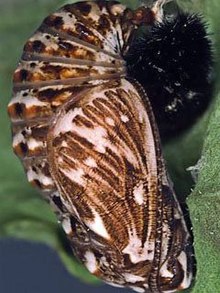 The pupa is predominantly brown and white

The pupae are 12.4–12.8 cm long and last 15–25 days (early May to late June in the UK). They are white with black and orange-brown blotches. Pupae are usually found close to the ground in or beneath dead leaves.[2][4]

A study in Cornwall, England, recorded mortality rates in the region of 50%, mostly from predation by small mammals, but including predation by beetles, and parasitism.[2] 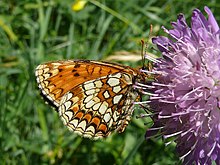 Imagines probably live for 5–10 days.[2] Males are active on warm sunny days. Females mate once shortly after emerging; they lay their eggs only during warm weather, spending most of the time either basking or hiding in vegetation.[2][4]

Across its range (see "Subspecies and variation" below), subspecies M. a. athalia shows a protracted flight period from mid-May to mid-August. In favourable localities and/or favourable seasons, a partial second brood has been recorded from mid- or late August to September.[3] In the UK, the flight period is from the end of May to the beginning of July (in the south-west) and early June to early August (in the south-east).[2]

Fennoscandian subspecies M. a. norvegica flies in June–July, precise timing being affected by the season.[3]

In southern Europe, subspecies M. a. celadussa flies in a single brood at high altitude in June and July. Below the subalpine level, however, it is bivoltine, flying in May–June and late July–August—except for f. nevadensis in the Sierra Nevada, which is univoltine.[3]

In the UK, the following species are used:[2] 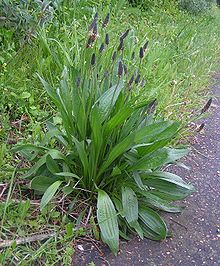 Ribwort plantain—one of the two main food plants on grassland

Up to eight subspecies are recognized in Europe:[3][16]

Many forms and subspecies of M. a. athalia have been described, but are best regarded as "ecological variants" and intermediates in clinal variation.[3] Bulgaria has f. boris Frühstorfer, with heavier marginal borders, alongside the typical nominate form.[3]

In Portugal and north-west Spain, M. a. celadussa f. biedermanni Querci is larger than typical M. a. celadussa, with finer black lines in the outer half of the wing, but a thicker discal line; transitional forms occur in central west Spain. In Sierra Nevada, f. nevadensis Verity is golden yellow with fine black markings (it is also univoltine, whereas typical M. a. celadussa is bivoltine at low altitude). In "southern" Europe, f. tenuicola Verity occurs in late broods—it is small and its black markings reduced.[3]